A Walk Through Buck Gully Reserve

I took some time this Afternoon to explore some of Buck Gully Reserve, located in Newport Beach. It's not the most extravagant trail to do, but it's close and short. At a leisurely pace I completed the entirety of it in 1:45 hours. You can park easily at Canyon Watch Park, which is accessible from San Joaquin Hills Rd.

The trail starts off wide and inviting, with its gentle slopes and bright green foliage. In fact, this is one of the wettest trails I have walked through. There is life everywhere even when the surrounding area is baked dry. From the trail you can see houses perched along the steep canyon walls. Looking through the canyon, it's not hard to see why. Most of my time was was spent looking onward, so the presence of the houses isn't so jarring.

A little farther along, there is an unnamed trail that tees the main trail. As a sucker for secret trails and hidden vistas, I decided to walk it. It was overgrown with grass and rather narrow, but that's why they are a secret. Upon reaching a dead end, I realized it was more of a glorified drainage ditch than a trail. Later, upon looking at Google Maps, it is a known trail. Oh well, there was at least a decent view at top.

Continuing seaward the brush became thicker, forming a green canopy over the path. At this point, I started noticing water on the trail itself, no doubt tributaries to the creek that winds alongside. One of the reasons I like this trail is the amount of life around. There were birds chirping and fluttering about in the branches overhead. The smell of the plants is more noticeable in the moist air. It is a relaxing place. A few more peaceful paces ahead is the first bridge.

Across the bridge is a fork in the trail named Bobcat trail, which leads back to the starting point. This is part of the tour, but not until I have reached the other end of the trail. A few minutes later and the trail opens back up, revealing the sky above. Hills are more common in this portion of the trail, but act as accents rather than obstacles.

The trail ends unceremoniously in a neighborhood that is close to the beach. The roads here are peppered with signs saying that it's a private neighborhood, so you likely can't park here. I took a few minutes to admire the surrounding landscape before starting my return.

The journey back to the lot is not as exciting, but it lets you get a different perspective on the hills you have been meandering through. It's like getting to enjoy the same trail twice. Because of the way the sun shines, it was significantly brighter walking back the way I came. What was a shady and cool walk towards the ocean a few minutes ago became a bright and radiant reflection of trees and shrubs. It wasn't long before I reached the aforementioned fork and began the ascent of Bobcat Trail.

While it is the most difficult part of the trip, the hike to the top is only moderately difficult and short at that. Around each bend in the rising earth, the view of the ocean became increasingly grand. I took pictures at several points, but due to the moisture in the air it isn't as visible as it could be. I like the visage nonetheless. The scene facing back towards the canyon is majestic as well. 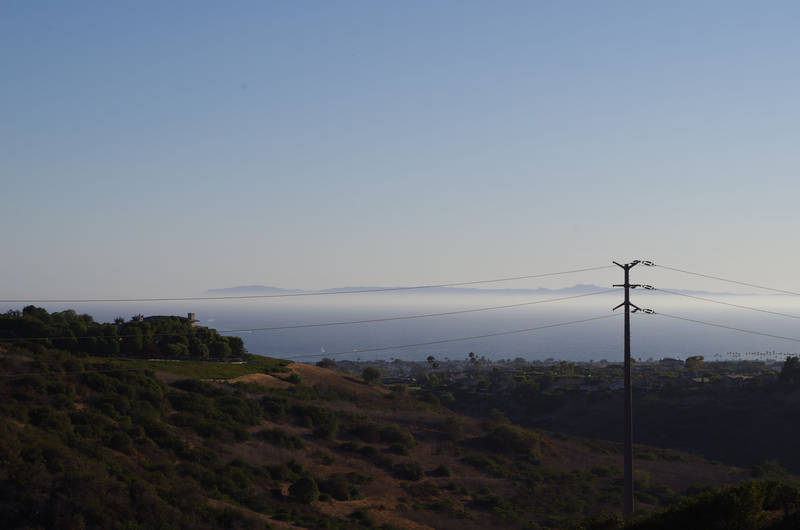 A few heavy breaths and beads of sweat later, I was back up on San Joaquin Hills Rd. Oddly, the place I returned to was not the parking lot, but Harbor Watch Park. Why there are two nearly adjacent parks I do not know. Fortunately, there is a wide sidewalk connecting the two. Even more oddly, there is actually a gate and a closed off trail between the two parks. If you decide to start this trail going down Bobcat trail, don't lose heart at the false gate, the real one is only seconds away.