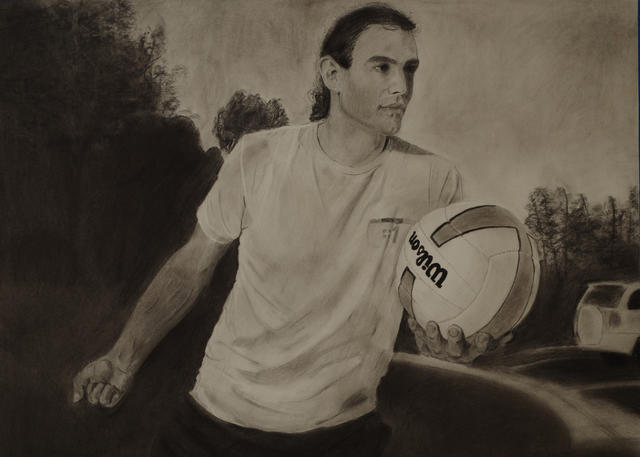 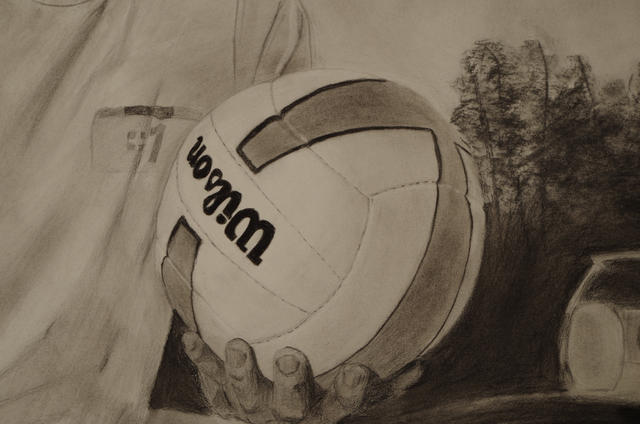 This was the final project for my figure drawing class. We had to pick a picture of a person, and draw them. I wanted to capture this time in my life, so I decided to do a self-portrait.

Because this is an intro drawing class, the initial line work was done using a 2H pencil in a dark room and a projector. The image was projected onto the paper, and I sketched in the major lines (I am not sure if this is cheating, but it sure feels like it.) After 30 minutes in the dark getting the outline, I emerged, took the paper home, and felt hopeless. Looking at a big blank page, even with guidelines, is daunting.

Over a couple of nights, I worked on different parts of the picture, particularly the hands and face. These represent the most interesting parts of the body, and are therefore the easiest to spot mistakes in. The picture was taken just as the sun was setting, so the shadows are fairly pronounced. However in the dark areas (the picture-right side of the face, and the picture-left hand), the details are almost lost. This is okay, as long as the details are implied by the surrounding area.

A lot of this worked out pretty well. The intent of this picture was to capture me at this point in my life. I love playing Volleyball, and most outdoorsy things. I currently have pretty long hair which, though likely to change, is me for now. Finally, I’m wearing my Google +1 shirt signifying what I do for a day job. This is pretty much me.

Artistic direction was a win too. The volleyball was closest to the camera, and thus is the sharpest, brightest, and is the focal point of the image. The background parking lot and trees were intentionally kept vague. That way you know what they are, but they don’t distract you from the centerpiece. Lastly, the picture shows something about to happen. It’s clear that I’m about to serve the volleyball, just by the stance and lean. It doesn’t look like I’m about to fall over (which is an easy drawing mistake!).

The subtle shading on the folds of the shirt I think look realistic. The key part to making the folds look real is alternating between light and dark. The transition edge between the two determines how much the cloth is folded. Pinch points (like underneath the armpit, and where the neck meets the collar) have a sharp dark edges since light cannot escape there. Additionally, the torso and sleeve are roughly cylinders, and thus should be slightly darker on one side than the other.

The volleyball turned out good too (I got the most compliments on the volleyball during the class critique). Some of the “Wilson” logos were left off the ball as to not distract from the rest of the piece. Two other things really make the volleyball “pop” out: First, the area around the logo is slightly brighter than the surrounding white material. This was done by using a paper towel and smearing some charcoal dust in ellipses on the far side of the ball. Secondly, the seams of the ball are slightly dark on one side, and brightened on the other. This really makes it seem like the seams have depth. I used a kneaded eraser over the edges for the effect.

Okay. I know. It isn’t me. It’s a picture of some guy who looks like me, despite my efforts. The picture-left hand is kind of squashed, with slightly gnarled looking fingers. I tried in vain to get the shadows on the hand to look right, but they refused to cooperate. The relative brightness of the intricate shadows is beyond me at this point.

The face could use some work too. It’s a little too narrow for the width. The far side of the shadow is too dark, and my eyes look kind of wonky. It isn’t clear that I am looking in a particular direction. Also, the lips are slightly distorted, leaving an unusual expression on the countenance. Faces are incredibly difficult.

Despite these flaws, I have strong suspicions of the culprit. The original line work was done using a projector and a photograph, which should be infallible right? There was no room for error unless I completely ignored the lines. Even so, I think I know the reason: horizontal compression. If the projector had squeezed the picture side ways, it would account for the hand being too small as well as the face being too tall. Humans are adept at reading the face and hands, so any small flaw would stand out like a sore thumb.

I am writing all this down as a reminder to both myself and others of how long it takes to learn to draw. It has been almost exactly one year since I started with a blank page and pen. If you want to know what a year of practice gets you, this is it. In 9 more years, I expect to look back on this and say “Why did I think this was so hard?” For now, I continue to sketch for an hour each night in order to hone myself.