The midterm of the semester just came and went, and I had to turn in all my work (my “portfolio”) as a progress check. As part of my commitment to get better at drawing, I have painfully decided to upload my work. The pictures below represent not what I find acceptable, but rather what I have accomplished. They are here not because they are good, but because they exist at all. I hope to look back at this in 10 years and think, “My, I have gotten better.” That can only happen if I show the truth, not a falsehood, and not an absence.

One of the first things I did in my class was attempt a still life, focusing on ellipses, ratios between things, and other forms of construction. You can see the original scaffolding lines in all their raw, unadulterated ugliness. There are also some stray-looking lines that surround the overall picture. These are the result of “enveloping”, or drawing the rough outline of the whole picture. (The computer scientist in me would call it a Convex Hull, but let’s use the art words for now.) 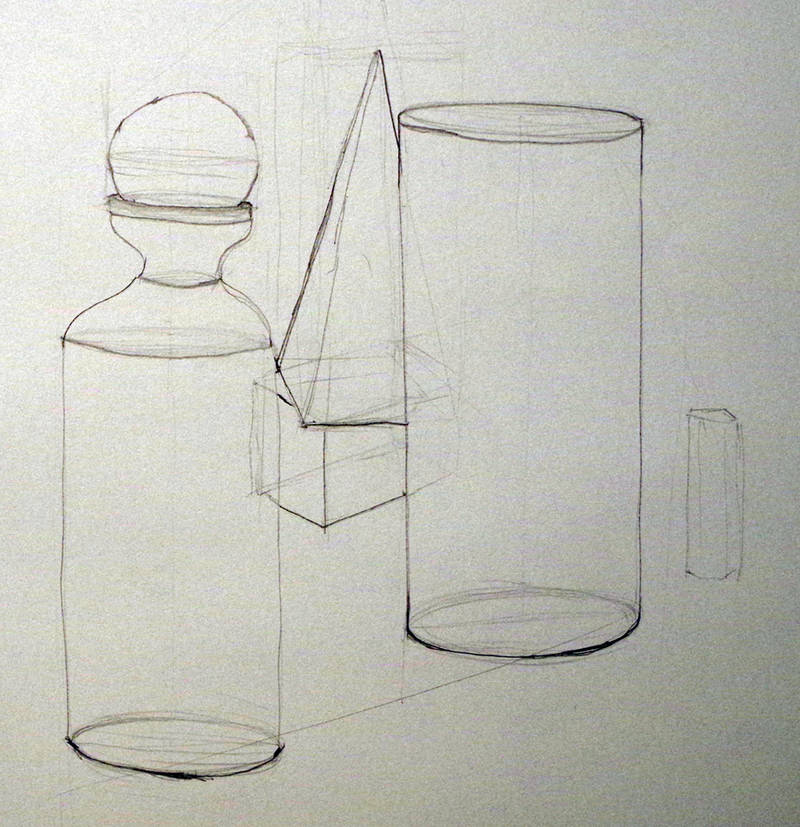 The next step after basic shapes is doing more and better shapes. The assignment was to take 5 items from dinner, and draw them using only line. The shape of dinner was not good for composition, so I picked some other objects that played together better. There are some errors that stick out to me, but only because I know what it /should/ look like. The fusilli box is far too short, the top of the Tabasco lid is just a hair too tall, the coffee mug is gargantuan compared to life, and the right napkin corner is off. This is bothersome, as the real life scene actually did have these oddities, (the napkin did look weird, I promise!) but drawing them looked wrong. I tried several times to make them look right, but eventually gave up. Instead I promised myself to tell anyone who asked that that was what it looked like.

What went well with this picture? The Tabasco bottle is good. The ratios between the length of the bottle neck and body were very difficult, but I am glad I put the time into making sure it was right. The label on the bottle is not quite straight, which is not at all obvious until you stare at a real bottle for a while. Only then was I able to see why my label didn’t match life, and then fix it. The hot sauce was my anchor for the rest of the sketch. 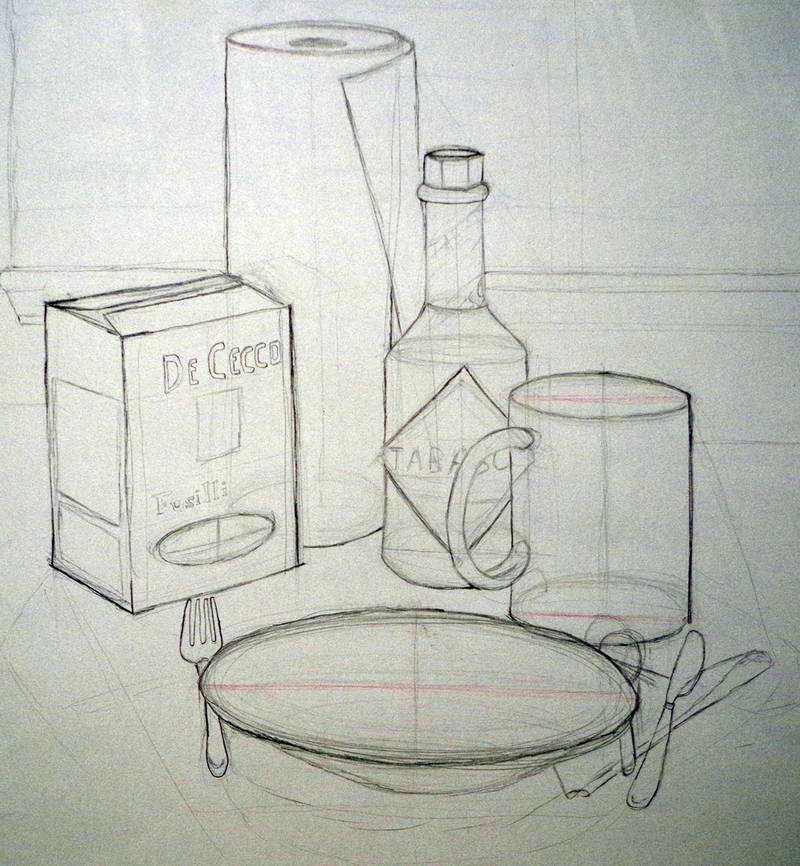 It’s clear what kind of object this is right? It’s a pumpkin! But why is it a pumpkin? What qualities of a pumpkin make it a pumpkin? A few things that are different about this drawing than the previous ones which add to the believability of the sketch: 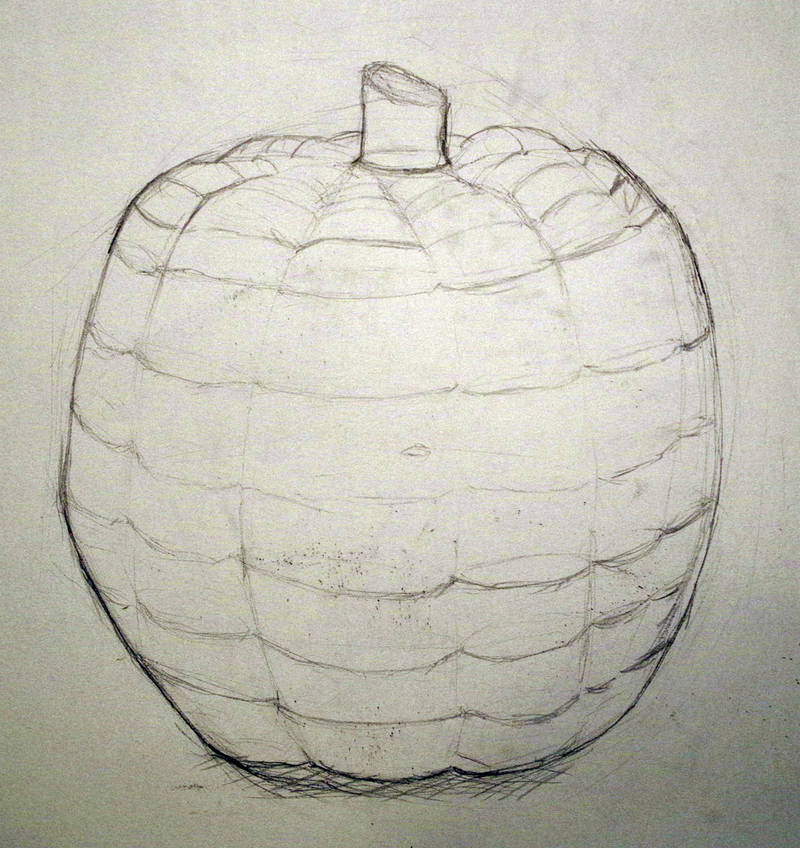 Whatever animal this was is lost to the ages. Not only because I don’t know but because the sketch isn’t work that I am happy with. The skull that I drew this from was at an odd angle making it hard to capture its more prominent features. The left tusk (appearing on right) is a little too big, and the cavities above the jawline are woefully represented. On the bright side, I am satisfied with the way the fracture in the back of the bone turned out. 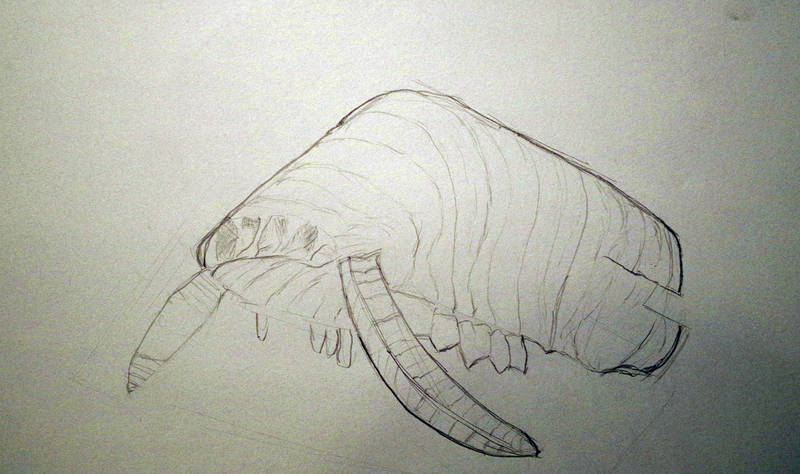 If pressed into picking the piece I consider my best work, I would pick this sketch. (It was also hung on the wall by my teacher as an example to the rest of the class!) The assignment was to use negative space to convey an organic and non-organic object. I’m pleased with this because it’s really clear what the objects are (my Saturn Coleus plant and a camera tripod, in case you can’t see it). The twists and turns of the leaves are believable, as is the pot it sits in. The tripod turned out great as well, as evinced by the straight lines that aren’t actually there. Notice that I just made dark spots on the page where I could see through to the other side. There are no lines for the tripod legs.

The thing that I like most about this is the “flow” of the plant. It looks like a wave or something, starting narrow on the left side and dashing out the right side. The shape is so identifiable to me that I had an odd moment recently. I looked at my plant from my bed and dreamily thought “I know I have seen that somewhere before”. I then sheepishly realized that it was I who had drawn the picture I remembered seeing. 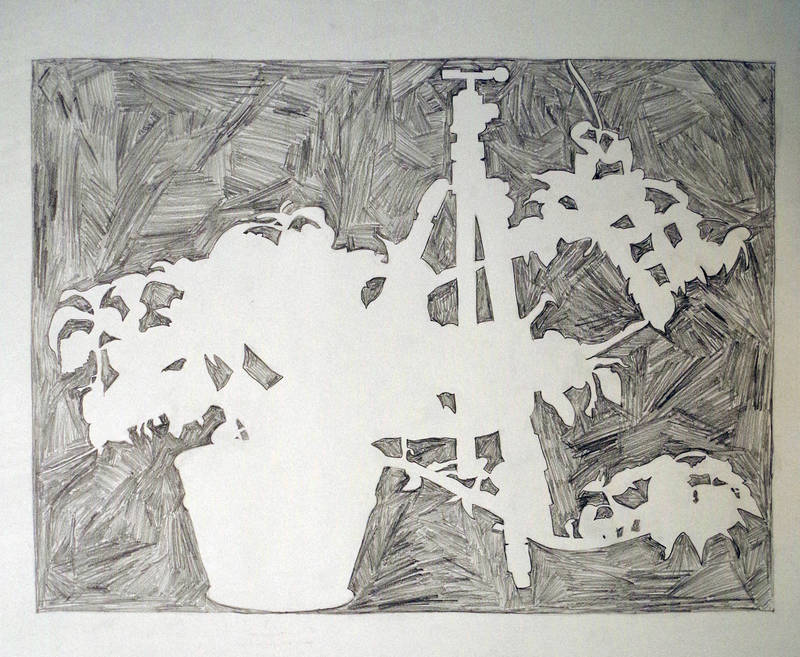 The purpose of this drawing is two fold:

This painting was drawn in two minutes, looking at my shoes. Being constrained to such a short time forces you to only draw the most important parts. 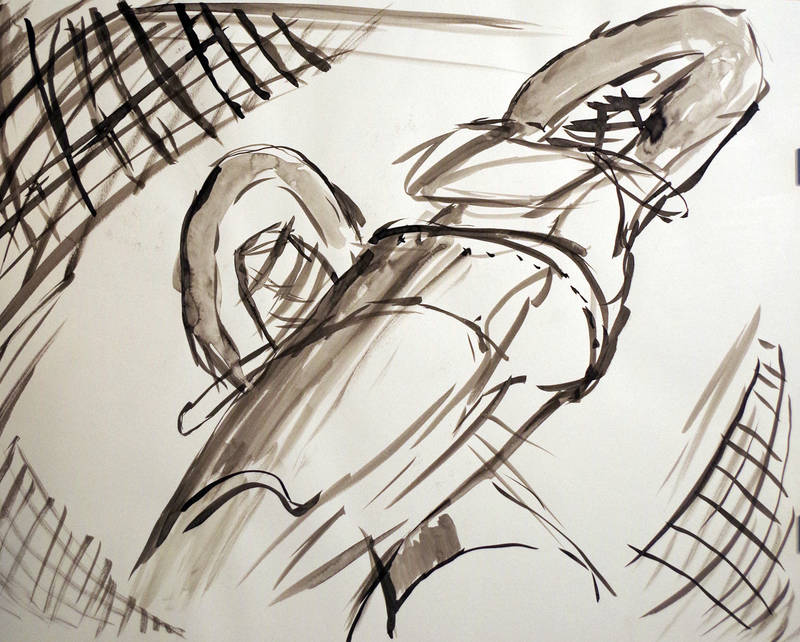 India Ink and the Path

In order to advance our compositional skills, we were asked to find some place with good “composition”, or a place where things looked good in their place. We had to draw the scene in two minutes (timed), in a little 3 by 4 inch rectangle in our sketchbooks. Once done, we had to paint from our thumbnail images what we had drawn.

Why? Because sketching fast forces you to extract the important parts of the scene. Copying it over really limits you to saving the parts you sketched in the first place. The result is a good idea of what the original looked like, twice removed. I tried my hand at this, in a medium I am not familiar with, and made the picture below. 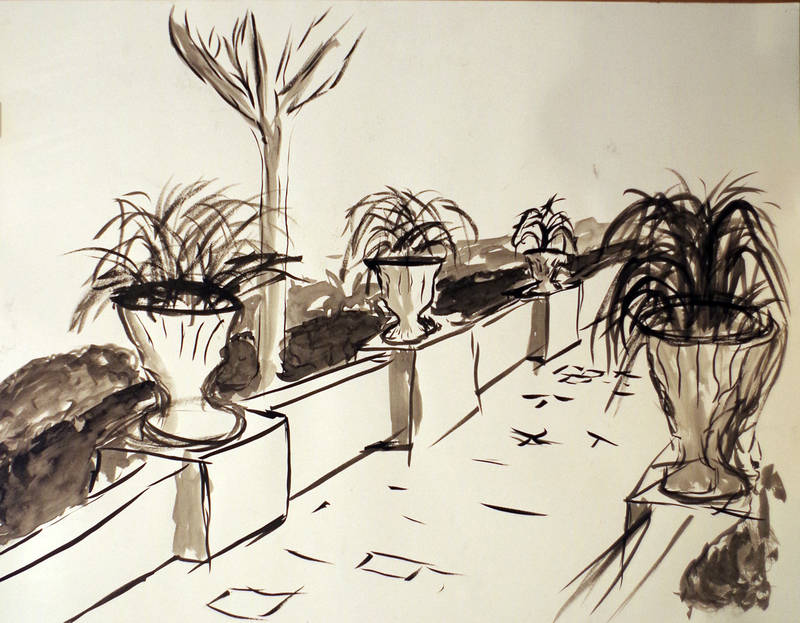 Building on the idea that working with something unfamiliar frees you from your preconceived notions about it, I drew a nose. The nose was at a weird angle, making for unusual lighting and shadows. I used vine charcoal to shade this nose, careful only to separate the shadow from the non-shadow parts. In order to approach value (shading, you might call it), we have to follow the same principle of general to specific. Get the big things right first, and then tackle the details. The most important part of shading something in with a bunch of heterogeneous shadows is to simplify it: split it into parts that are dark and parts that aren’t.

The nose, which was a white, ceramic thing, had some darker and some lighter parts. I split it up into light and dark, and used a thin, delicate reed of vine charcoal to darken the parts that were in the shadow mass. There is also the cast shadow in the back, that appears to be much darker than the other parts. Don’t be fooled! It was deposited by the same piece of charcoal as the rest of drawing; it just wasn’t blended. I blended using a paper towel I got from a nearby sink, but you can use any piece of paper to blend.

(Side note: the youtube videos for showing how to use a blending stump, a tool specifically designed for blending charcoal, are depressingly lackluster. Just buy one and play with it to get a good idea of what it can do.)

The next picture explores a little more with blending. I tried to draw a ball and bottle, which have smooth, gradient-like shadows along their bodies. This is where the blending let me work from light mass to shadow mass. The cube is not as interesting, but does provide contrast to the other shapes. I am not that happy with this drawing, and could have spent more time making it better.

Finally, in order to test out my understanding of adding value, I drew a more complicated still life at home. My choices were a book, a coffee filter (I also used a coffee filter for my blending :) ), a candle, a light bulb, and a coffee mug. The approach I took was to draw the basic shapes of each of these objects, and then squash them down to either shadow or not shadow. It was painful in the intermediary stages to throw away the work I had meticulously spent illustrating. The candle edges were looking great, but I had to wash over them with a layer of alluvial ash. However, I think my mind fills in the detail there based on other information in the scene, so it wasn’t as cringe-worthy as it felt at the time.

In general I am not happy with this drawing. The book proportions are wrong, the coffee filter looks flatter and droopier than it really was, and the light bulb was a poor choice for shadow due to it being quite shiny. Even the mug, which is slightly misshapen due to the design, looks bad in my opinion. It’s really a shame because I spent an hour just picking out objects I thought provided an interesting scene. The only redeeming object is that faithful candle. 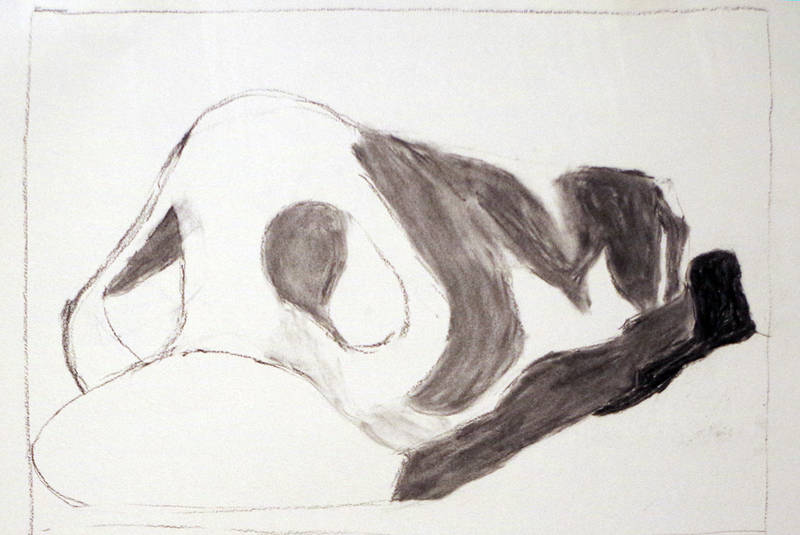 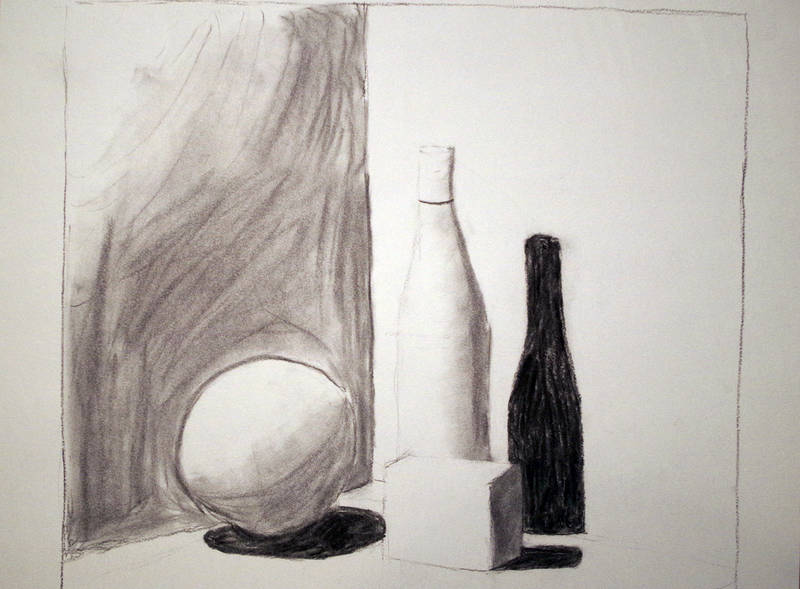 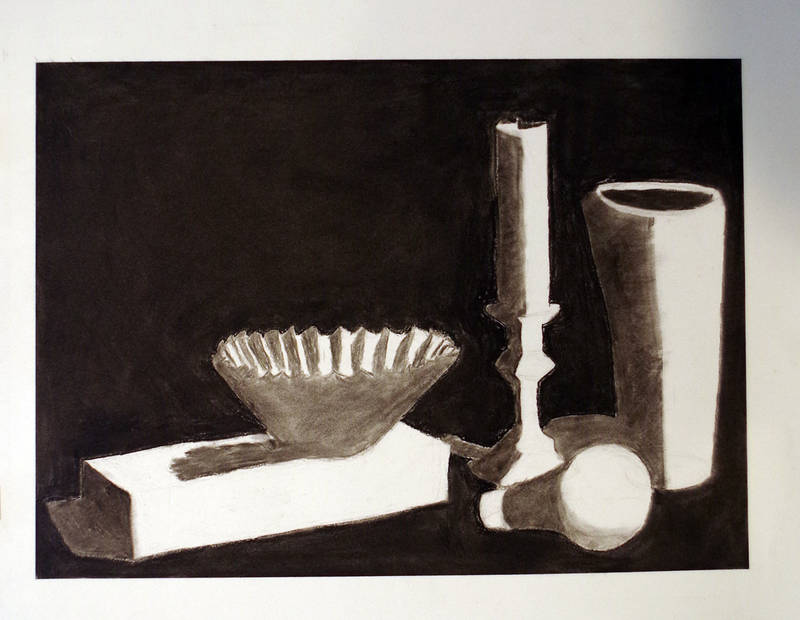 What happens if you can use more than 2 levels of shadow? You get lots of levels of shadow! For this assignment, I used gray paper instead of white, setting the middle brightness of the sphere to that of the paper. I also used B and 2B charcoal pencils for the shadow mass. I also got to use for the first time, the mythical white pencil. I have a little swatch showing off the range of colors I could make in the first picture, with an example sphere. You’ll notice some darkness around the top right of the sphere. This is called lost edges, and when done properly (unlike my drawings), the transition from light to dark on the sphere’s skin is less noticeable.

Below that picture is the same thing, but on white paper, and no white pencil. (no eraser either!). Finally, I have attached another attempt at getting this right. Special attention was paid to getting the reflected light correct on the bottom of the sphere.

On the whole, I am unsatisfied by my work on these three. It looks wrong and it doesn’t look good (though, in general, those two are not mutually exclusive). I was frustrated by this assignment even though I normally enjoy them. Trying 10 more times would be excessively time consuming, but would have made me better at it. 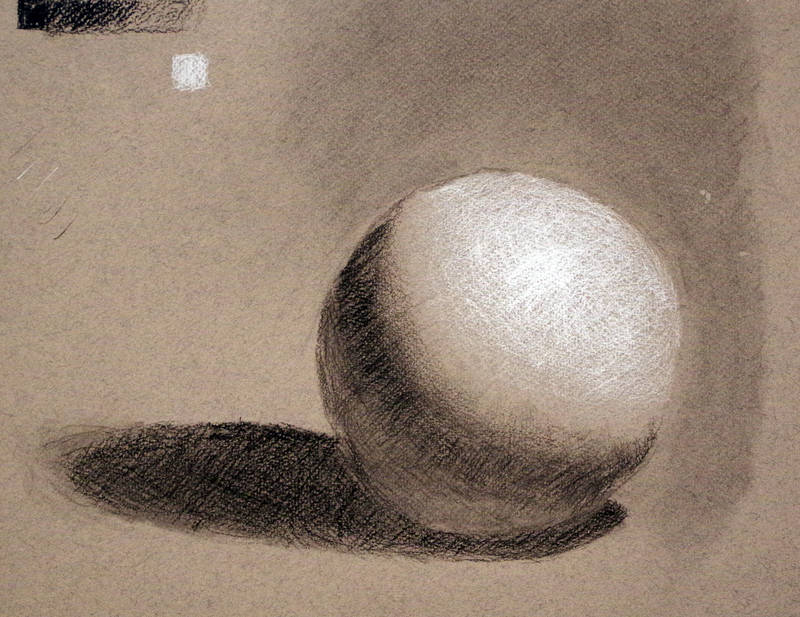 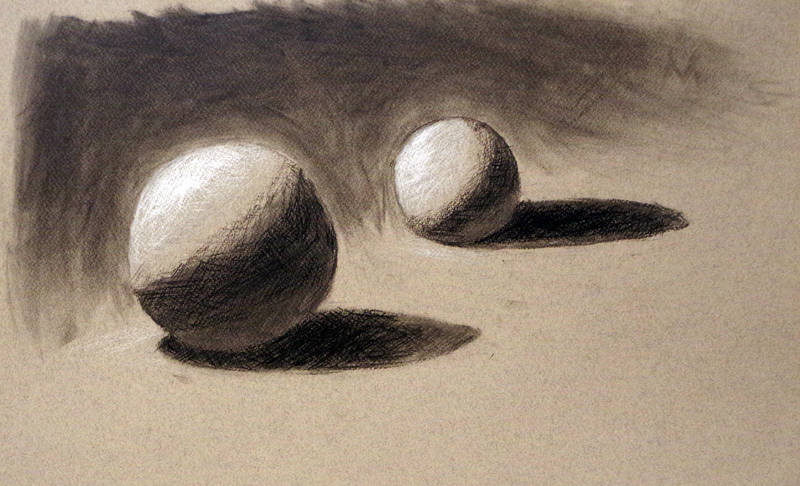