If you are into biking and enjoy the outdoors, there is a bike trail in Orange County called Back Bay Loop. It is a short trail that encompasses a scenic wildlife preserve known as Back Bay. The trail is succinct, beautiful, and forgiving to newer cyclists. I took the time to shoot some photographs of the surrounding area today.

A good feeder trail to Back Bay is the San Diego Creek trail. The trail is part of a larger "Mountains to the Sea" trail which stretches all the way from Irvine Regional Park down to Newport Beach (about 21 miles by my measurement). I live closer to the ocean, so it only takes about 10 minutes via San Diego Creek to get to the loop. The trail is bike, pedestrian, and equestrian friendly, so you are almost sure to see passers-by. Since the trail follows the creek, there is an abundance of greenery to the right. After passing under some highways, I arrived at the bay. 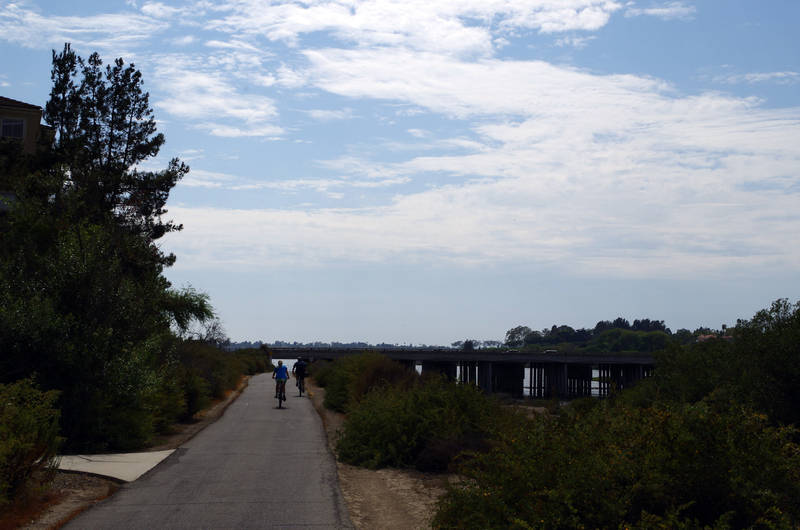 Riding under the Jamboree bridge, I arrived at a sharp turn in the bike path. The turn also doubles as a good place to pause and see the bay, or to fish, or to just take a break from longer bike trips. Just past the turn is a fork in the path, going either clockwise or counter-clockwise around the bay. I personally prefer the clockwise path, so southbound I continued. 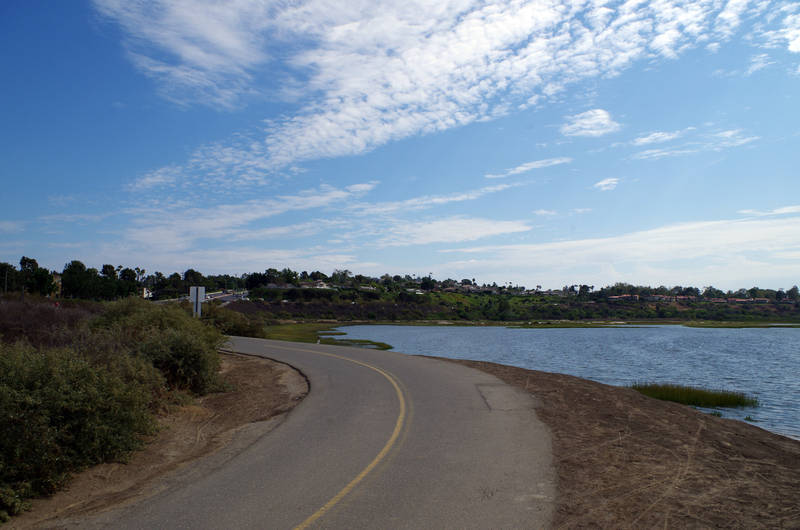 Continuing along side Jamboree for a bit and then taking a right at the intersection led me to a small lookout point. It has a small stadium style seating arrangement as well as some pay-binoculars for looking out over the bay. Airplanes taking off from nearby John Wayne Airport can be seen clearly from here, usually directly overhead. If you are into night photography, long exposure shots are best taken from this vantage point. A few quick photos later, and I was ready to take the plunge down towards the bay. A sign warns about down hill speed; they mean it! 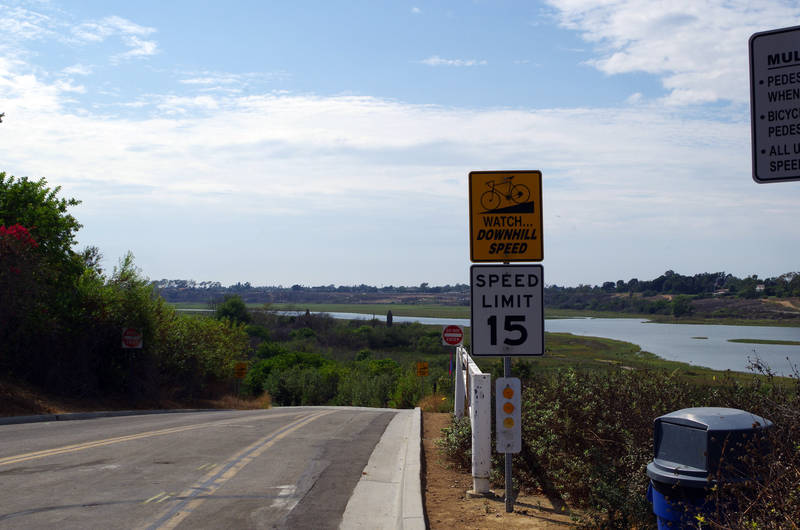 Flying down the hill fills your face with high speeds and breeze. The hill bottoms out at about sea level, with lush vegetation on either side. There are a number of birds in this nature preserve, so be on the lookout for numerous varieties. Along the paved path is a wooden peninsula protruding into wetlands. At the end of the walkway is an educational plaque describing the avian life in the area. I pulled off to the side to snap a photo of an airplane flying overhead.

Moving along, I passed next to some steep canyon walls. The walls here change as quickly as I could pedal, going from soft, leafy backdrops to dry, jagged rocks. The varied colors and textures of the canyon walls are a few of the reasons I like traveling through here. All the while the open calmness of the nearby bay water provides needed contrast. It's a pretty, peaceful ride. 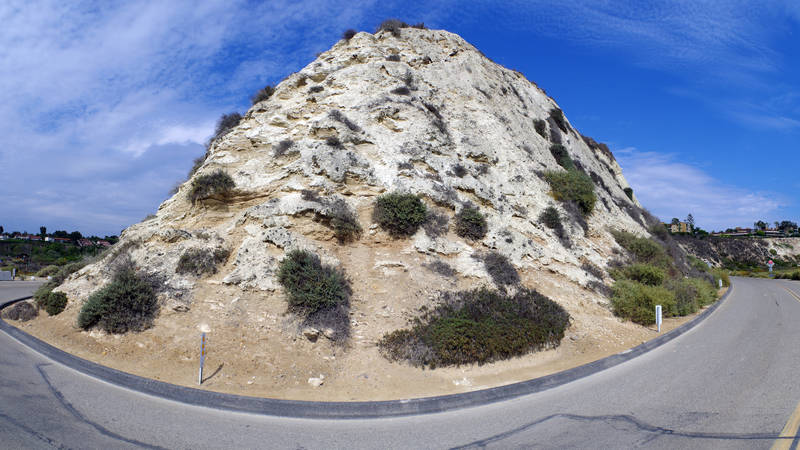 There are a few more offshoots along the bay, each worth pulling over for and taking a glimpse. Most stops are car accessible as the trail doubles as a one way street (bikes excepted). At one of the stops people were launching canoes into the water. After a little more pedaling, I reached the intersection where the trail joins with Jamboree again. However, there is a another trail that runs along side of a site for RVs and weekend camping. I followed this trail straddling the camp ground.

Along this last leg of trail leading to the ocean, the air was filled with aroma. I was able to distinctly pick out the spicy sage, sweetness of what I believe to be sweet olive, and the charcoal of nearby grills. On the other side of the camp ground fence is tinny radio music and children screaming. A weekend getaway is what I imagine the campers are here for, due to it being so close to the beach. As I cycled by, a patch of flowers in the fence caught my attention.

At the end of the trail is Pacific Coast Highway. Its possible to ride on road, but the double-wide sidewalks make for a less congested ride over the Bay Bridge. On the other side is a small, elevated park called Castaways Park. Painted on the steep asphalt leading to the park are instructions to walk your bike. But, don't be coddled! Ride your bike (even in low gear) proudly up to the top. A satisfactory wave of achievement will wash over you as you crest the hill, followed by a light sweat.

Castaways Park is notable for a life-sized metal soldier. The park provides great views of Newport Bay, Balboa Peninsula, and the ocean. Looking East you will see the houses banked against the Crystal Cove hills, reflecting the afternoon Sun. Looking back is the bay and sea vessels, albeit from a raised perspective. This is the way to go to complete the loop. Be sure to refill your water bottle at the fountain at the corner of the park.

The next portion of the trip was somewhat lackluster, foraying through neighborhoods of fancy houses. I did take the time to admire some of the masonry of the homes along the street, but alas there isn't much nature to view. Fortunately the ride is downhill and thus can be completed quickly. The bike path continues at the intersection of Santiago Drive (the street I took) with Irvine Avenue.

Hugging along side the road, Bayview Trail continues the my trek providing periodic scenes of the bay. Sadly, the trails that actually lead towards the bay are non-bike trails, so I was only able to see the sights in passing. Eventually the trail takes a gradual right, leading to a narrow, downhill path, not unlike a flume ride. At the bottom is a brief open area that usually has horses to see. Its easy to miss, so steal a glance to your left as you race by. The remainder of the trail is uneventful and leads back to the fork I took near Jamboree.

If you enjoy the solace of the marine decor, I recommend exploring the Back Bay. I picked a bicycle as my means of transportation, but you can pick from walking, horseback riding, paddle boarding, kayaking or canoeing. All are great ways to enjoy the preserve.