An Attempt at Making a Comic

Comics are hard. If you think that a comic looks easy, or are a flick of the wrist, or a recycled joke, then you haven’t tried it yourself. Here’s a doodle I did while thinking about comics: 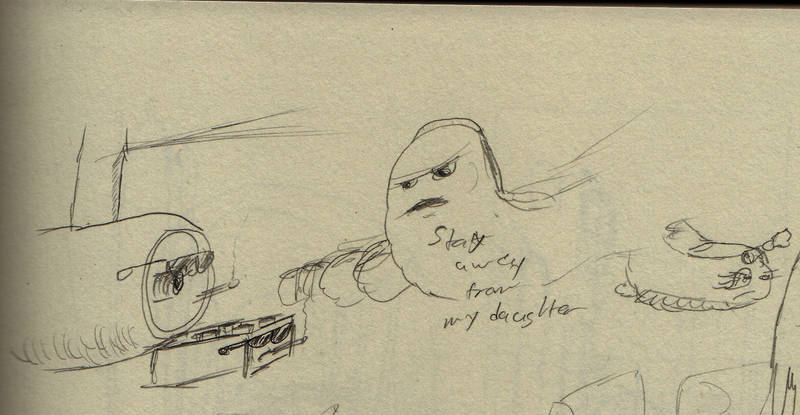 The joke isn’t new. Bashing your toe against the bed wheel, or stepping on a lego. A dad being protective of his little girl is a thing we seem to know about as a society. Is it funny? I thought it was a little. While neither of the two ideas is original, I don’t think the juxtaposition of the two has been been used. I declare myself to be creative.

So why does this picture mean anything? First, the lego and the wheel are personifications of what we the viewer dislike. Legos are fun, and wheels are useful. They are both wearing sunglasses (also cool) and smoking cigarettes (not nearly as cool, but still kinda cool). These on their own are not enough to make you think a thought. However, the introduction of tension to this scene casts them in a negative light.

Dad, on the other hand, makes this scene. He is taller than both the bad boys, he’s looking down on them and he’s furrowing his brow-line. He also has absolutely no hair on his scalp, which, for a toe is normal, but for an older father figure works nicely. You know this guy.

Also readily apparent is that this is a foot. Why is it a foot rather than a bunch of lines? The little toes next to him, while not adding to tension of the scene much, make the big toe “pop” into its place on the foot. There are also receding lines behind the big toe, showing the rest of the foot. These lines are really vague, which is a good thing. If there was a lot of detail on the rest of the foot, it would draw the attention away from the angered stereotype in the center.

There is a (admittedly poorly drawn) daughter like toe abstractly behind dad looking sad and dejected. She’s been unjustly cut off from her love, unable to see a way out of her lachrymose abyss. She isn’t physically near dad or the bad boys, but she is on the other side of them, which is more important.

Finally, and possibly unnoticed, are the lines coming off the top of the wheel. I kinda wanted to show that this was happening under the bed, not only because the bed wheel has to be under a bed, but because it makes it clear that dad is the one out of place. He had to leave his abode to come here, into dangerous territory, to warn those damn kids. Why does any of that matter? Two reasons:

There’s a lot going on here.

So why did I spend all this time talking about why a scene “works”? Because this is what you have to think about when you make a comic. You have to make the viewer believe that this is really happening, even if it’s with anthropomorphized objects. It has to be something the viewer can relate to and also would find funny. This all has to fit together, or it will fail.

You may have noticed that I totally skipped over how the drawing looks pretty bad. This is on purpose, primarily because it isn’t the important part of the drawing, but because sometimes people don’t notice! If I pointed it out to you, you couldn’t help but see it. Since you read all the way to this point, I’ll list what I can see as wrong:

Side note: Also, if you want to draw any sort of living thing, you also need to know how bones, skin, hair, and musculature look and fit together. Add that to the pile of things to learn.

How some artists crank out a comic a week or even daily is marvelous. To be able to go from a funny idea, to imagining the scene, to drawing it out, coloring it, and publishing it is an impressive feat. If you ever look at a comic in a newspaper or online, please consider the amount of work that goes into it before dismissing it.

Am I a unique person? A cheap and superficial answer to this is “yes”. A more thoroughly thought out entertainment of this idea will be much more painful. I wonder sometimes if, when I look in the mirror, it’s actually Carl looking back at me. The other, harder to face possibility, is that I am merely the sum of my surroundings: that I am a deterministic human whose initial conditions laid the path for his future. If I had never met that person, If I had never struck up a conversation with other human being or never had that experience, would it be the same me asking this question?

Rather than dive into the shadowy depths of truths I might not be able to face, I take along my scientific mindset. Let’s devise a test: Can I come up with something original? If I was really a unique person, then I should have thoughts that are my own. Even if they are just puns of other ideas, it would console me to know that I am able to produce something new.

That is why I took the time to upload this fuzzy, poorly sketched, poorly scanned, picture of a recycled joke. It’s something I have seen before, and the art style I used I haven’t seen before either. It ain’t much, but it’s something I created, and that is what I was looking for. With time and practice, I will make more of these.